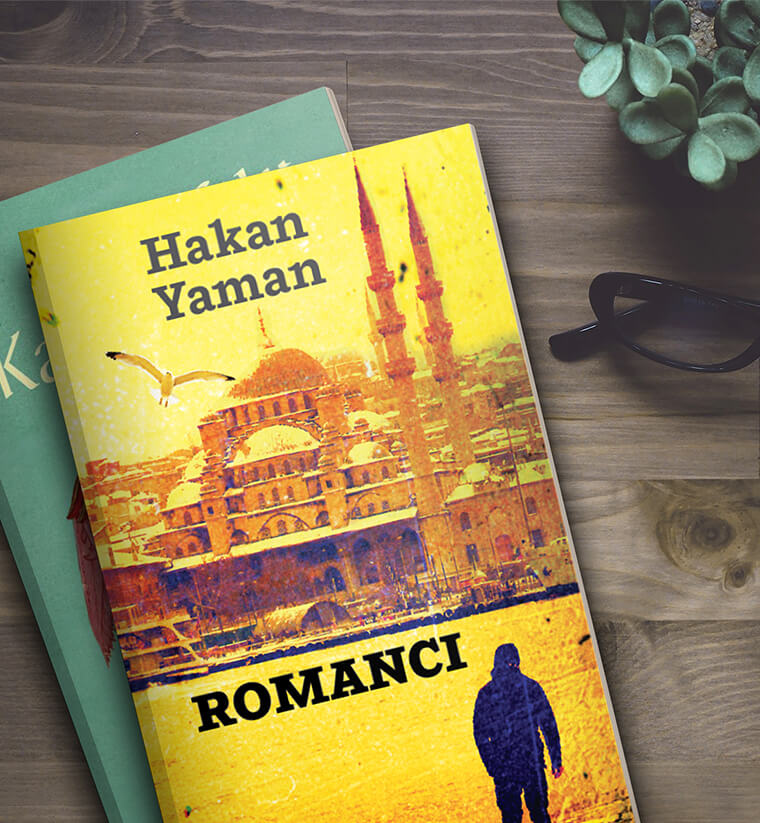 The protagonist of The Novelist is a loser who has a disappointment both in life and in authorship. In his last novel, he is telling us how he came on the verge of suicide. He does the best thing he can and starts writing a suicide novel instead of leaving a short suicide note behind.

Our novelist protagonist confesses that he committed a double murder just in the beginning of his novel. While the police is seeking him, we are reading the last novel he is writing. Through the novel we are taking literal strolls in the old quarters of Istanbul, we are walking around the parks with his sister and her dog, we are going into dark bars in Beyoglu, we meet the novelist’s veiled girlfriend Zahide, his sister with Down syndrome, his retired journalist father.

While he is telling us the chain of events, driving him to commit murders with patient and fictional narrative, he is slowly taking us back to his victims and to the moment of murders. Literature never leaves us alone through our strolling.

The novelist starts with the confession of the protagonist. He is unburdening that he committed double homicide and he is hiding from the police. Thereafter, we get to know our protagonist, we meet his ex-wife, her new husband, and we learn that three of them shared the same house for a while.

The protagonist of the novel is an author who could not gain a success from his novels. He is working for a magazine and doing translations. Things do not go well in his life and in job. Authorship stays at the center of his life, but he had no significant success on that either. He lives together with his ex-wife and her husband in a house in Cihangir due to lacking of money. In those days, he finds a postcard in one of the book cafes. He sees a post card on his table on his return from toilet. The note on the back of the postcard changes the flow of his life. This mysterious note becomes the first piece of cheese that will drag him like a curious rat into the labyrinth of riddles full of literary questions. Hereafter, each time he solves a puzzle he goes deeper in the labyrinth and finds himself with a new riddle on his hand at a different quarter of Istanbul. Questions send him to the places relevant to notable persons in Turkish literature. He first thinks that one his fans designed this game, and he likes it, but in time this labyrinth of literary puzzles becomes serious and starts threatening his life.

The novelist meets Zahide while he is strolling Istanbul in a game that is set with a godlike arrogance by someone unknown to him.

Zahide is a veiled woman from a conservative family. Therefore, his vision is completely   contrary to Zahide’s. Nevertheless, the novelist falls in love with her at first sight. It takes some time for him to notice the fact that he has now a head scarfed girlfriend.

He starts dating with Zahide in the quarters where he has never been before not to encounter someone he knows. Zahide uncovers his fantasy of veiled woman, which was long buried inside of him. He cannot resist her charm.

Meanwhile, he goes to the park together with Naz, his sister from his mother’s second marriage and with her dog Biber whom they took from a dog shelter. He loves her sister with Down syndrome. After his head scarfed girlfriend Zahide joins them, they become a little bizarre looking quartet, but he was happy to be a part of it. Meanwhile, the novelist moves to his friend Ertuğrul’s house. Ertuğrul lives together with her girlfriend Firuze here. He plans to stay there for some time until he will be able to afford to rent his own flat. He has a one- night stand with his freidn’s girlfriend Firuze in this house.

Afer a while, the novelist mentions to Zahide about the mysterious riddles that makes him strolling in Istanbul. Then they start solving the puzzles together. This helps them to get closer. But the novelist is anxious about this coupling. Although he finds Zahide so attractive, he thinks that his relation with her will not last too long, because she is different. He goes to his father’s house in Ayvalik to spend some time there. He plans to think there and take a decision about his future. They do not see each other in this period.

He becomes depressed as Ertuğrul and his girlfriend die in an accident just after he returns from Ayvalik. He does not move, he continue to stay in their house. They start being together in this house instead of dating in teahouses. Finally, he can’t resist Zahide’s beauty and accepts to make imam marriage to make love to her. This rarifies everything.

A long stroll in the labyrinths of riddles leads him to the famous author Tuğrul Güler. He is the one who sets this play. He learns that this homosexual author is tracing him since a long time. Moreover, he creates a web to enmesh the novelist to be with him.

Meanwhile, Bu arada sağlık sorunları başlayan Naz’a doktorlar kanser teşhisi koyarlar. Tedavisi için gereken para ailesininthe doctors diagnose the cancer to Naz. Money needed for to cure her is far above her family can afford. The novelists asks this money from the famous and rich author Tuğrul Güler. Tuğrul Güler accepts to help, but on one condition.